Below, you’ll find abridged versions of my author newsletter, where each send is timed for the 50th anniversary of a significant milestone in spaceflight. To receive this mailing, sign up here.

As I send this, the uncrewed SpaceX Crew Dragon is finishing its first test flight with a splashdown in the Atlantic Ocean. Literally, RIGHT NOW. So, why is this a big deal? It’s been nearly a decade since a crewed space flight has launched from U.S. soil—since then, Americans have been partnering with Russia to launch in Soyuz capsules from Kazakstan.

This is a huge moment in American spaceflight, but also a monumental shift, as SpaceX and NASA’s Commercial Crew Program are working in tandem for the first time to complete this mission. Fun fact: this is also the first time a spacecraft that was designed for humans will land in the Atlantic Ocean in 50 years. That mission was (conveniently, for me) Apollo 9.

This edition is about a relatively short, often overlooked, mission: Apollo 9. This flight stayed in Earth’s orbit, unlike Apollo 8’s exciting journey to the moon and back. But like every other Apollo mission before it, 9 played a critical role in getting astronauts safely to the moon on Apollo 11.

The LEM, or the Lunar Module, is the beautiful gold creature seen in the photo above. (You might also recognize it from its predecessor which eventually landed on the lunar surface.) The lunar module is relatively small, compared to the shuttle that ferried it into space, and it’s fragile as it was designed fully for lunar orbit rendezvous.

I’ve always found Apollo 9 exciting, because it was the first test fun of the full Apollo spacecraft, and the first time the LEM was released into the environment it was built for. While the earlier Apollo missions proved we could make it to the moon, Apollo 9 reassured us that we could actually land on it—which was the whole point of the program, after all.

I have to be honest, I’ve been avoiding this one. I’ve been timing these issues to release with the 50th anniversary of all the Apollo missions! I’ve previously covered Apollo 7—SPACE MUTINY!—and Apollo 8—MOONRISE—but I’d be remiss not to acknowledge the 52nd anniversary of the Apollo 1 disaster.

Did you ever wonder why the Apollo missions start with “lucky number” 7? Well, starting with Apollo 7 was never the plan. The program started, in fact, with AS-204, or Apollo 1. This mission, NASA knew, would change the future of spaceflight forever, and it would be the first of a series of crewed missions that would bring humans to the moon. The launch date was set for February 21, 1967. 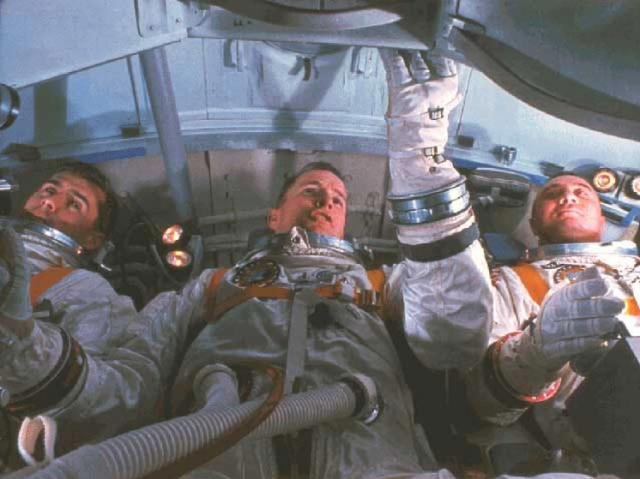 Naturally, a series of flight tests preceded the planned launch, and the astronauts pictured above (left to right: Roger Chaffee, Ed White, Gus Grissom) had been training for months. January 27th, 1967, was a particularly frustrating day of tests: communication issues were a continual issue, to the extent that Grissom shouted “How are we going to get to the moon if we can’t talk between two or three buildings?”

The tests continued until a transmission was heard from the spacecraft at 6:31 p.m.

In less than a minute, the fire consumed the spacecraft, and Chaffee, White, & Grissom—trapped inside—were killed.

After eighteen months of investigation (and another 50 years of reflection) it was determined that a stray spark started the fire. The spacecraft was pumped with 100% oxygen, an environment which allowed the flames to spread quickly. The abundance of foam and nylon padding the craft certainly didn’t help. And to top it all off, the hatch door took a full minute to open, making a quick escape impossible.

The fire was devastating, but it led to many improvements in astronaut safety: pure oxygen was replaced with a nitrogen-oxygen mix, technicians removed the flammable objects, and changes were made to the hatch doors that kept the astronauts safe while still allowing for a quick escape in emergency situations.

The Apollo 1 disaster, the Challenger explosion, and the loss of the space shuttle Columbia all occurred over the span of five days (not… the same year, obviously) making late January a challenging time of the year for NASA. On January 25th of this year, NASA honored their fallen astronauts through a remembrance ceremony at Arlington National Cemetery.

Ok that was sad, so here’s a pretty picture from my next newsletter send! I’ll be back to you in March with more about Apollo 9: the SPIDER’S FLIGHT. 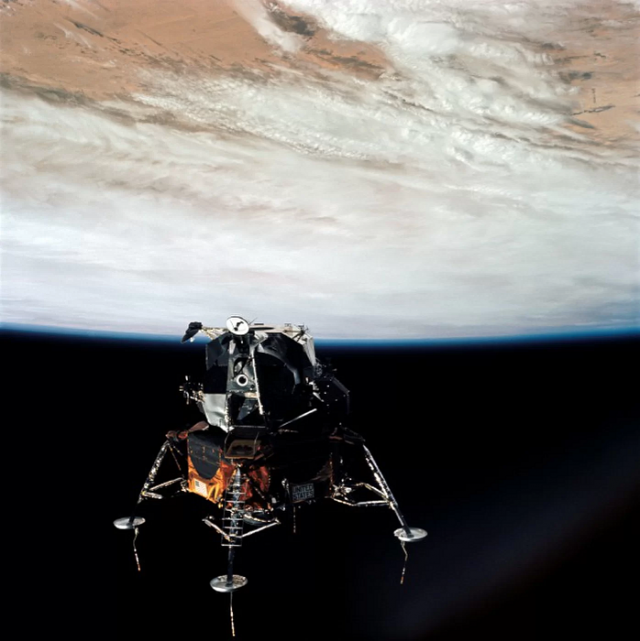 Welcome to the second issue of ~Phil Stamper’s Official Author Newsletter~ where I keep everyone up to date on author news, while giving myself a wholly unnecessary platform to ramble about NASA’s iconic Apollo missions.

Today, we get to celebrate the 50th anniversary of one of my favorite space missions of all time: Apollo 8. Where Apollo 7 was vital, but overlooked, Apollo 8 spurred an excitement in the space program that had been waning since the Apollo 1 disaster. You can learn more about the flight here. 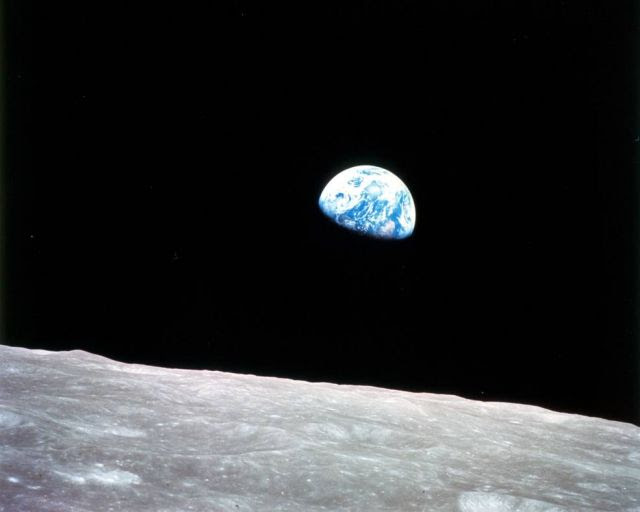 Apollo 8 was the first crewed spacecraft to orbit the moon and safely return. The above photo, Earthrise, is one of the most iconic pictures in history. But it was a truly spontaneous moment—Bill Anders, who was meant to take scheduled photos throughout the flight, looked out of the window and became the first human to ever see the Earth rise from the perspective of the moon. Here’s an excerpt of the convo between Anders, Frank Borman, and Jim Lovell, the three Apollo 8 astronauts:
Anders: Oh my God! Look at that picture over there! There’s the Earth coming up. Wow, that’s pretty.
Borman: Hey, don’t take that, it’s not scheduled. (joking)
Anders: (laughs) You got a color film, Jim?
Hand me that roll of color quick, would you…
Lovell: Oh man, that’s great!
Adding to the spontaneity, Jim Lovell casually named a previously unnamed mountain—radioing back to their CAPCOM while passing over it—calling it Mount Marilyn, for his wife. The name was widely recognized, but technically informal, until 2017, when the International Astronomical Union finally agreed to formalize a few honorific titles, starting with Mount Marilyn. 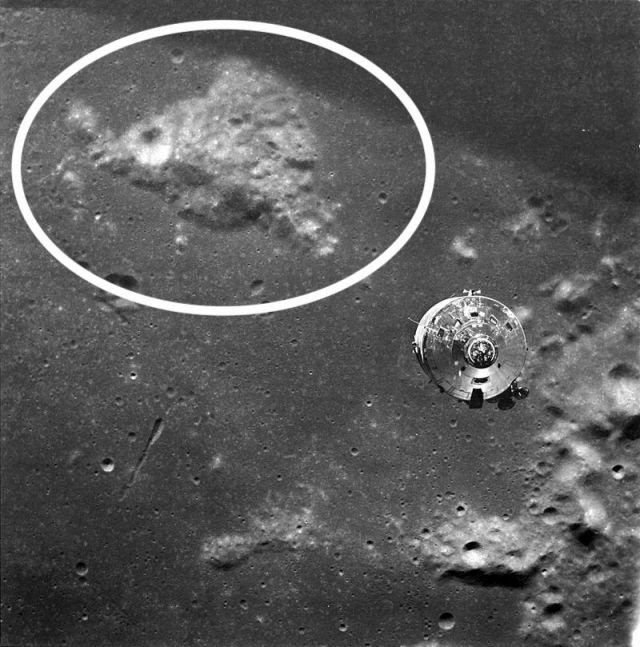 Shortly after the christening of Mount Marilyn, the astronauts led a live Christmas Eve TV broadcast from the moon. This became, at the time, the most watched program of all time, ramping up interest in—and building up the belief that we could one day walk on—the moon.

Thank you for signing up for ~Phil Stamper’s Official Author Newsletter~ at some point over the last few months. In early 2020, THE GRAVITY OF US will be on bookshelves at a store near you. That’s… a long time from now, but as I finish up edits before we pass it to the production team, I wanted to send over a quick update on all of my upcoming projects, some podcasts and interviews I’ve recently been featured in, and of course, some nerdy rambling about space-related things.

Contrary to popular belief, THE GRAVITY OF US is not set in space. I realize having an entire newsletter section on Space Stuff will not help that assumption. Oops.

Last month we got to celebrate the 50th anniversary of the Apollo 7 launch and landing. It’s an often overlooked launch—Apollo 11 landed us on the moon, Apollo 13’s near-disaster showed the brilliance behind the NASA scientists and astronauts as they made a safe return after an early explosion—but none of it would have been possible without the first crewed Apollo mission, Apollo 7. You can learn more about the flight here.

One thing I find cool about Apollo 7 is the fact that the time in orbit really showed the mental strain put on the astronauts, resulting in space mutiny. There were a lot of factors at play, but Wally Schirra developed a severe head cold in space (none of them felt particularly well) and refused to make the crew put their helmets on, so they could equalize the pressure as it increased during reentry… pinching their noses and blowing, kind of like what we do on airplanes, but with a looooot more pressure.

Anyway, the crew was punished for their space mutiny and Eisele and Cunningham were banned from flying any future missions. Schirra—the only pilot who flew in the Mercury, Gemini, and Apollo missions—had already announced retirement, so not much could be done to him. But mutiny or not, their heroics paved the way for the future of the space program, and helped get us to the moon in 1969.